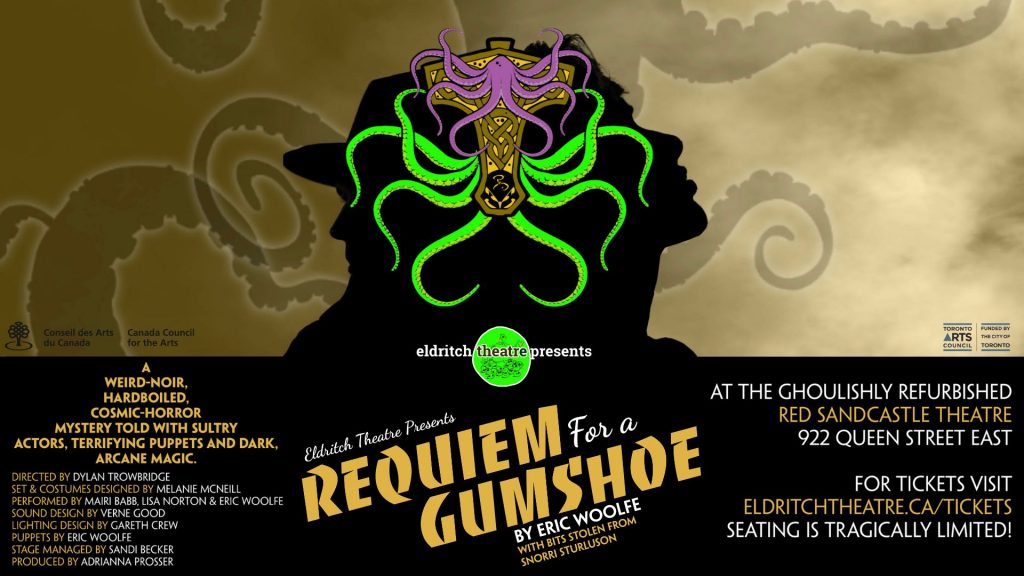 From the mad geniuses that brought you the Dora Award Winning Space Opera Zero! comes Part II of the Apocalypse Trilogy

“It’s as if the Norse Legend of Ragnarok was the bastard love child of HP Lovecraft and Raymond Chandler.”
– Eric Woolfe, Artistic Director

A weird-noir, hardboiled, cosmic-horror mystery told with sultry actors, terrifying puppets and dark, arcane magic. A warlock running from his past. A woman running from the End of the World.

Rick Fischmascher is a rumpled private detective and warlock for hire, haunted by the death of his son, and entrenched in the arcane murder of a troubled opera singer. And he’s the chief suspect. Requiem for a Gumshoe is a weird-noir, hardboiled mystery, re-telling the Norse legend of Ragnarok in the pulpy style of Raymond Chandler infused with the cosmic horror of HP Lovecraft.

REQUIEM FOR A GUMSHOE

I’ve done a lot of shows at The Red Sandcastle Theatre, including my one-woman show premiered with me in it there, I’ve done a few indie theatre shows like The Parliamentarians, and I even helped form a collective of playwrights and formed a festival around our work before the pandemic called Whiskey Ginger Collective. It’s been an amazing space to hold my creativity, as well as the homestead for Eldritch Theatre productions, even longer than I have been with them! So when Rosemary Doyle from Red Sandcastle approached Eric Woolfe of Eldritch Theatre and I to talk about the future of that black box studio on Queen East – I was all ears!

Eric and I are taking over as new management, and I have already done a digital overhaul of the logo, the social media, and the website (that one in thanks to Christopher Mott!) and am already taking booking for 2022, but we don’t “move in” until December 1st, 2021. I’m already excited for it! Eric and I have plans to refresh the space and honour what Rosemary has been doing for these past 10 years in that space: making performance dreams come true. Now, Rosemary isn’t leaving, she’s just taking a necessary step back so she can focus on her life in Kingston as Theatre Kingston’s Artistic Director.

Here, read all about it on the website: https://redsandcastletheatre.com/10-year-anniversary-announcement/

And hey, it would be swell if you gave us a like on our new social media pages that I created:

So if you are in need of a black box theatre in 2022 or beyond give me a shout, I know this red head with a theatre that she’s looking to rent 😉 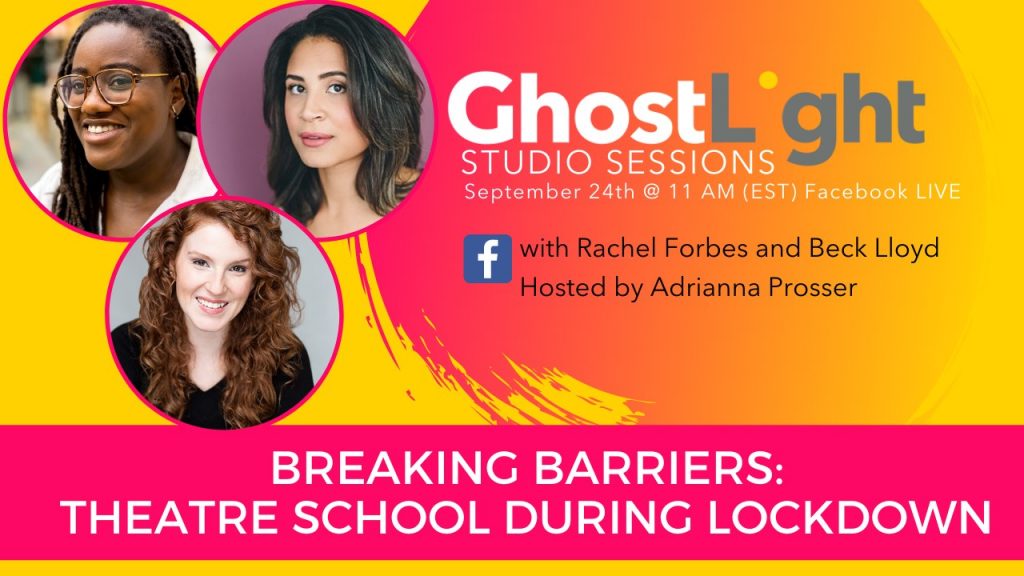 Studio Sessions: Theatre in a Pandemic
September 24th @ 11AM (EST)

“Breaking barriers” is our theme for September as we discuss how we can break through the lockdown restrictions and still create the art we love.

This Studio Session we are talking to Rachel Forbes and Beck Lloyd about going back to school and teaching theatre… during a pandemic! How does that work?

Discussion points we want to explore:
-what kind of “classroom” are we returning to?
-rehearsal halls vs. zoom calls
-collaboration online vs in person
-learning curves: navigating change onstage/online

Have a question for our panel? Send them ahead of broadcast to: socialmedia@ghostlight.ca or post your questions below!

Or join us LIVE and chat with our guests during the broadcast. 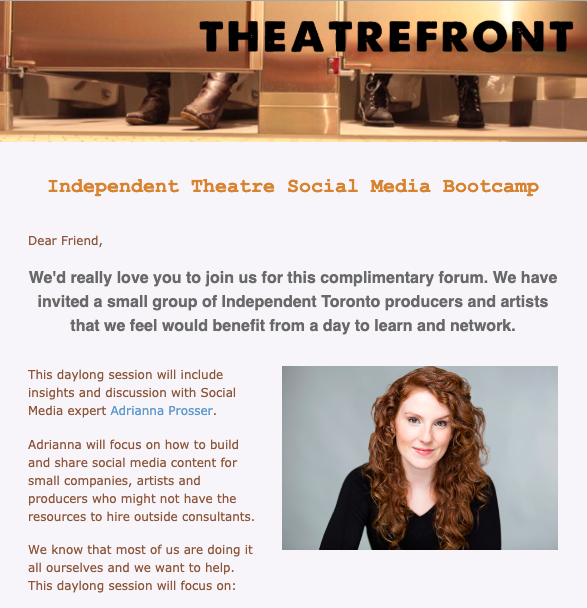 For more details (SOLD OUT)

I have been working behind-the-scenes (well behind-the-screen) for Groundling Theatre and Crow’s Theatre’s adaptation of Julius Caesar as their social media specialist. I have been having a blast managing their Facebook and Twitter, where so many audience members and critics are able to interact with me and tell me how much they LOVE this production.

I still haven’t seen it outside of a rehearsal I was lucky enough to attend, so just you wait until I start raving about it too – I’m seeing it this week!

Want to see it? Catch it quick as it closes February 2nd and it’s selling out all the time: crowstheatre.com/caesar and if you need accessible tickets check out: https://www.crowstheatre.com/1920promo#JuliusCaesar

I am so excited for Checkpoint 300 at Fringe this year – ok ok I’m bias, because not only am I working on the show as their marketing and publicist, but I also know Michelle Wise (Playwright and Director) and Geoff Mays from a long time ago from my actors life. Plus bringing to life such a heavy but important subject as xenophobia and religious conflict in the middle east – this show won an award for being such a great piece of theatre. I hope you can see it: https://fringetoronto.com/fringe/show/checkpoint-300

I took photos from their rehearsal for media use and I am happy to put my learning curve of photography to use: (and a little graphic design to add in the mix!)

Happy Fringing to you all! And let me know what is on your “Fringe Picks” this year, I have some theatre to see 🙂

A few years ago I started working with Eldritch Theatre and it was magical – no really there was actual magic! The creatives in Eldritch Theatre are pretty stellar and even though I’m the Marketing Monster and Producer, I’m still made to feel a part of the creative team.

This year we have a smash hit magic/horror/retro-sci-fi/sexcapade/puppet space adventure! And I took the set stills for marketing (eep!) and I made the opening credits, inspired by the 1930’s Flash gordon serials:

There have been great reviews, great fan feedback, and the houses are always bursting with laughter (and people! We keep selling out!) So as a Producer this is making my heart happy, and as a theatre creator it’s making my heart explode because we need more risk taking, more ridiculous, more PUPPETS in our lives.

I hope you get to see it – and because I’m the Producer I’m going to share a secret with you… “Comic Horror” is the discount code for $20 anytime tickets and there is always PWYC Sundays that you can book ahead! 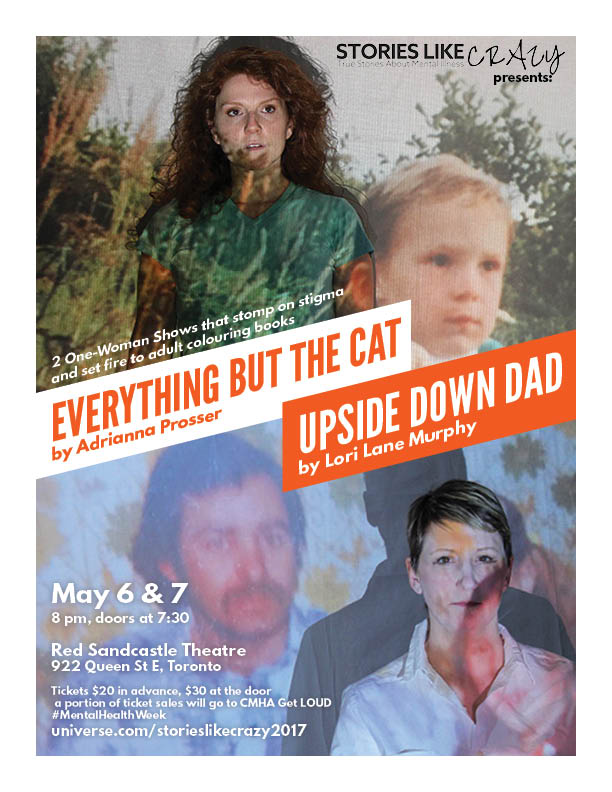 Great news! I have a new adventure and it includes magic, horror, and puppets! Check out the upcoming show from Eldritch Theatre:

I am now their Marketing Monster and I am in LOVE with what I get to do for them. You know I’m addicted to social media right? And I’m polishing my Producer hat to help Brimstone McReedy come to be this Halloween. I really hope you can make it.

How did this come to be? I actually went to see Eric Woolfe’s show Doc Wuthergloom last year for Halloween (my partner Jason and I LOVE LOVE LOVE Halloween) and we had such a great time that we talked about it for days. So I had to email the theatre because this doesn’t happen everyday! The Artistic Director (Eric) was very humbled by our reviews and when I said I would be delighted to help with social media for the company in the future – guess what? 8 months later he asked me to do just that 🙂

And let me know if the revamped website makes sense (because I revamped it! Eep!)
www.eldritchtheatre.ca

And here is their super secret Facebook Group that gets all the news and discounted tickets first:
Cabal of Horror

I hope to see you at the Halloween show!

Adrianna is Jean, a young widow during WWII who works at Jenkins, an airplane assembly factory. She befriends Eve, Pepper, and Julie and together they are the best of friends in State of Women.