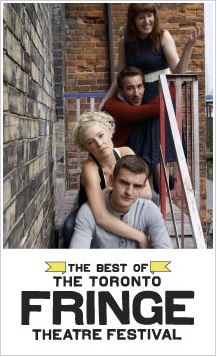 Adrianna played Jenny in “The Shape of Things” with Lone Pine Productions/Theatre Bassaris. WINNER of “Best of Fringe!”

“Prosser gets one of the show’s standout moments (not to mention the best outfits) with her apology for not being “artistic” or “cool” enough, which is a message all of us navel-gazing Fringe diehards need to hear every once in a while; we need more Jennies at the Fringe.” ~From Rhymes with Dramaturg

“Let me jump right in by saying that the acting was positively stellar. There wasn’t one moment in the entire show that I didn’t believe in what the actors were saying, and boy, were they spewing some quick-fire lines at each other. ~From Mooney on Theatre

Torontoist gave it 4/5 stars! “The supporting cast shines, too, providing a necessary counterpoint to the main plot.”