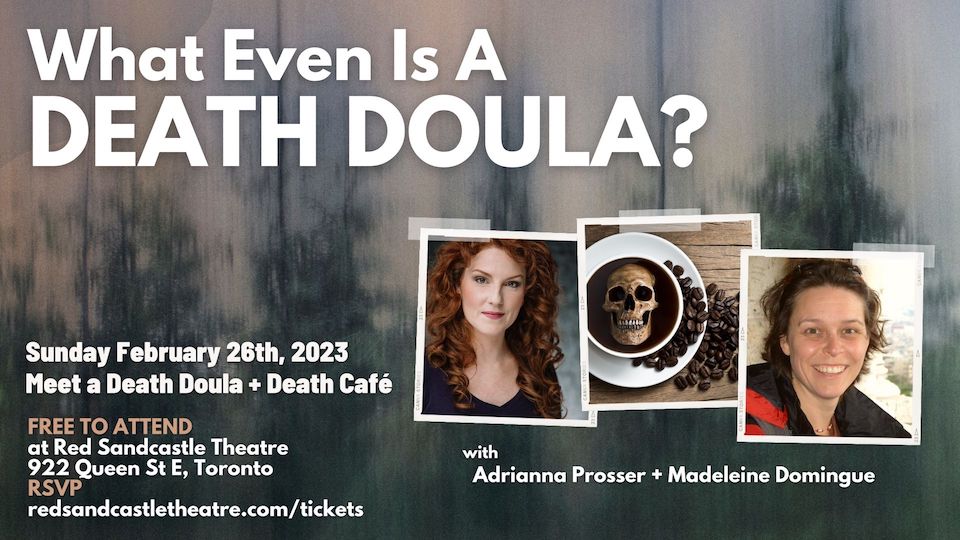 What Even is a Death Doula? + Death Café

What even is a Death Doula? Have you heard about the #deathpositive movement? Ever attended a Death Café? Join Adrianna and Madeleine in discussing death, dying, and end of life planning to take the taboo out of talking about death.

2PM – 3PM: Meet a Death Doula
Hear from Adrianna Prosser and Madeleine Domingue about their practice as End of Life Companions; brief introduction as to how they got into death work and death education with a Q+A.

3PM – 4PM: Death Café
An open forum discussion of death with no agenda, no objectives, and no particular themes. This is a discussion group rather than a grief support group or counselling session. Chat or just listen!

*Donations to the space are welcome, but this is a free event

Up to 20 participants only, please RSVP to save your spot for free:

RSVP: https://forms.gle/4d9gmzQCSM1tcgTH7
**This is masked event, the policy of the theatre is to wear a face mask that covers the nose and chin inside the theatre at all times

Adrianna lost her brother to suicide in 2010 and his death propelled her into a journey of understanding grief and bereavement. She became a suicide prevention trainer, and has her applied suicide intervention skills training (ASIST), of which she has provided workshops across Ontario and Quebec. In 2019/2020 she companioned her friend Roberta with terminal cancer by escorting her around the world to complete her ‘bucket list’ before she died. Continuing her death education, she has her Grief Literacy certificates with Being Here, Human; as well as a certificate from Douglas College as an End of Life Doula. She went on to train with Hospice Toronto and completed over 40 hours of their core companion training as well as their bereavement and grief support worker training and is currently a volunteer Hospice Companion and Grief Support Worker with them.
http://www.adrianna-prosser.com/mentalhealthworker/deathdoula/

At the age of 22, Madeleine witnessed a suicide of a stranger by gunshot. She stayed with him until he died, holding his hand. As you can imagine, it was life changing. After losing both her parents in the span of a year and a half, it was hard for her not to notice the sincere lack of death care in the system. She promptly, (and naively) became a PSW thinking she could change things from that angle. Getting frustrated, she went to ITM graduating from the Contemplative End of Life Care program, was asked to join the Dying Well Collective, hosted and participated in a considerable number of death cafes, trained and volunteered at Kensington Hospice, got certificates Grief Literacy with Being Here, Human and was a co-founder of the Ontario Death Cohort. Madeleine’s work as a Certified Dementia Care Provider has been blended with her end-of-life care to provide compassion and education. It has been an honour for her to serve the many families she has and be part of this ever growing, whispering deathcare movement.

For more information about this global movement to help people become more comfortable speaking about death and dying, visit their website www.deathcafe.com.

It’s been quite the journey to becoming (or realizing I’m) a Death Doula. I have had great training and resources through Hospice Toronto, continue to read and challenge myself with certifications and death education. But its been 2 years to the day since I applied for the End of Life Doula course and I keep finding meaningful moments that propel me forward on this path.

Just today I started with a new client who at the end of our phone conversation said, “Wow, this really helped, thank you for taking my call, I just really needed to talk to someone.” And sometimes it’s just that simple: being open to receiving another person’s story. Really listening and validating their experience. Other times its starting a discussion or sparking a debate on my TikTok about being a Death Doula – this time about the “tissue issue” and whether or not to give tissues to someone who is having a crying moment (as an act of mourning). And sometimes it’s me expressing my grief and end of life care journey for my loved ones through storytelling to help me process my grief journey and finding community. TikTok has been such a big part of my journey thus far!

With over 5k followers, I am finding like minded people and those who are curious about the death positive movement:

The more I do this, the more I find myself sharing stories and listening to other peoples stories and connecting through them – that’s the heart of or at least the focus of my doula practice. My training as an actor and playwright/English Minor in University has served me in ways I couldn’t foresee 20 years ago. What a neat evolution!

So looking forward to 2023, I already have a Doula To Do List! I am remaining curious and seeing where this path takes me.