I have been working behind-the-scenes (well behind-the-screen) for Groundling Theatre and Crow’s Theatre’s adaptation of Julius Caesar as their social media specialist. I have been having a blast managing their Facebook and Twitter, where so many audience members and critics are able to interact with me and tell me how much they LOVE this production.

I still haven’t seen it outside of a rehearsal I was lucky enough to attend, so just you wait until I start raving about it too – I’m seeing it this week!

Want to see it? Catch it quick as it closes February 2nd and it’s selling out all the time: crowstheatre.com/caesar and if you need accessible tickets check out: https://www.crowstheatre.com/1920promo#JuliusCaesar

Hey guess what? I’m the Social Media & Community Manager for Dauntless City Theatre‘s Drunk Ado About Nothing PLUS I get to play Margaret in this Tiki 1960’s version of Much Ado: cheers!

This weekend I open Comedy of Errors with Urban Bard Productions! I get to be me… well kinda: I play Adriana of Ephesus and she is kinda like Miss PIggy but with an Irish accent and dressed like she’s from Pride and Prejudice. Come check it out! 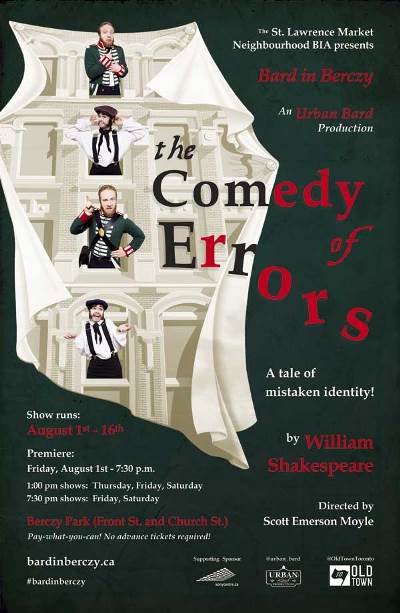 Adrianna will be playing Adriana in Urban Bard‘s Comedy of Errors which will be outside at Berczy Park Aug 1-16, 2014 every Thursday, Friday and Saturday. This performance will be set in Toronto in the year 1815, or as we were known then as Muddy York, and Adrianna will be an Irish immigrant new to Canada.

Adrianna is attending a playwright workshop at Hart House tonight to work on her Irish famine piece that got it’s start as a 14 minute show with Humber River Shakespeare Company as The Sonnet Show – she hopes to have a full length show inspired by these characters! 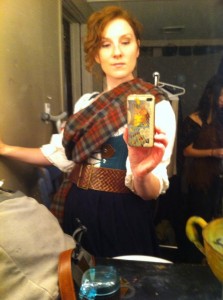 The first Drunk Macbeth was a runaway hit, so we’re doing it again! Two brave Macbeths take to the stage to try their hands (and their livers) at the experiment.

Adrianna will be playing Lennox (behind-the-scenes picture to the left!) and The Second Weird Sister

This past weekend I feel like I have lived a month in a single day. Or, I guess, counting the fact that I did two different shows in two days, it should be a month in 48 hours…

On Friday at 9 am I did my one-woman show for the Durham School Board, District 13 to be precise.

With 37 teachers representing several different schools I was more than a little nervous to do this show for THE FIRST TIME IN FRONT OF AN AUDIENCE. And a very important audience at that. I was presenting to them on their themed PD DAY event about Mental Health Awareness with the hopes that if they liked what they saw they would invite me to their school to present my show. 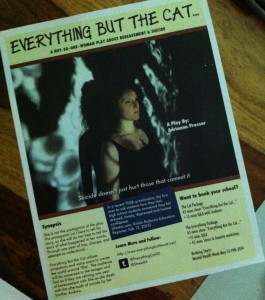 <– The talented Dwayne Harmer made these awesome teacher’s info sheets. And then it was time to do the show….

AND THEY LOVED IT! 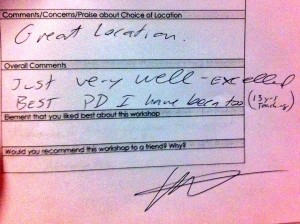 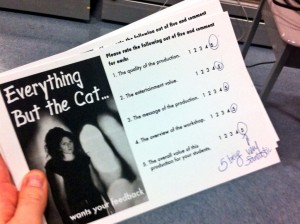 ^ That comment card above made my heart swell, much like the Grinch, to 3x it’s size. I knew after the presentation that I had something. I had a story to share. That Andrew’s story was to be shared. It felt great to be able to do that. One teacher asked if I could do the show next week! HA! I hope my team can follow up and start a tour soon, but that may be too soon! But just to be safe, I quickly went on an epic journey to purchase a projector for the awesome projections in my show. I nicknamed it “Princess” because Dwayne and I were laughing about the fact that it did turn into a quest not unlike the quest of rescuing Princess Peach in the Mario Bros videogames. The projector/Princess was always “in a different castle” (or store) and we had to keep moving onwards! So when we finally found one it was rightfully named Princess 😉

Then that evening I had the pleasure of escorting my very talented boyfriend, Jason Martorino, to the private screening of his horror flick “Kingdom Come” which was AMAZING! Sometimes it’s easy to get swallowed up by one’s own projects – but I am so very lucky to have Jason who is supportive of my work and I his. It was great to be his plus one and witness his hard work on screen. So great. And so great that he helped me out on my project as he was my Sound Operator for my PD Day presentation.

Next up on Saturday was Drunk Macbeth – with only 2 rehearsals (including the day of: 12 pm start and I left at 11:30 pm…) it was nerve wracking up until we took the stage at 8 pm. Get this, we SOLD OUT and had a rush line that we ended up turning away! The best part? Wearing Scottish attire:

I was given such great compliments for my Lennox/Second Witch roles! My fav was that I was such a “badass goddess” with my dirk and tartan 🙂 Yup. That made my day.

So after this weekend, of which I did a month of prep for production wise (please visit the website I designed www.everythingbutthecat.net and enjoy the twitter feed of @Urban_Bard from the show night and @EverythingCatTO because they were curated by me!), and acting wise (holy jeeze a 45 minute monologue of a show, and then remembering my iambic pentameter…oy.) Ach mon to be more in theme 😉

So you will excuse me if I fall in a heap as my brain/heart/limbs are all exhausted from this weekend. And thank you to everyone that helped me get here. After a nap, or two, I will get back to making the tour happen!

This weekend I will test myself in many ways.

Tomorrow I am presenting Everything But the Cat… to a group of teachers on their PA Day Mental Health Event. They pre-registered for my show and an info/talk-back session with myself and Dwayne Harmer, the author of “The Kit” (which is the resource for my workshop for the audience).  The idea is to get the word out that we are open for business and bookings! We will start bookings in May 2014 for Mental Health Awareness Week (May 13-19). This will allow us more time to update our performance to the best of our abilities: new shadow actors, better quality voice overs, slick workshop design… All because we look forward to touring high schools. So fingers crossed we get some interest tomorrow!

Then on Saturday night it’s Drunk Macbeth where we have had 1.2 rehearsals for this show! This will be a bit “fly by the seat of your pants” kind of show and it should prove hilarious! I play Second Witch and Lennox.

So here’s hoping for smooth sailing – see you on the other side of this scary/thrilling/nauseating/exciting/challenging weekend!

Adrianna will be Lennox and the Second Witch in this exciting fundraiser! Know more: