One of the many hats I wear is shaped like a bonnet – well, at least that’s my usual hat when I’m at the museums. I am a storyteller and sometimes the story I have to tell is that of Toronto’s history at some of the historic house museums. You can learn about my endeavors on my Historical Interpreter page and see more about my historical dramas built for site specifically on my Playwright page.

The Toronto History Museums and I have a long standing history (pun intended) of creating experiences for patrons to explore history in a different/immersive way. I have created several theatre-in-situ/site specific stories based on artifacts, letters, diaries, and photographs. Here’s my little piece in the museum magazine about it: 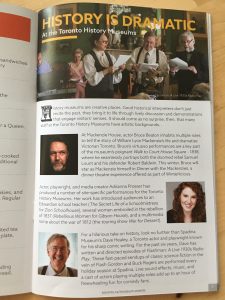 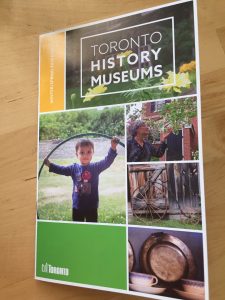 So fun! I can’t wait to see what our next creation will be 🙂

I haven’t been in front of the camera or treading the boards since State of Women closed, but that’s not to say I haven’t been performing… You may have noticed I fell in love with social media and I have pursued it with a college certificate & I made a move to headquarters within the museums I work at to tell the story of ALL the museums, not just the two I have managed since 2011. I love storytelling. I think that it was only natural for me to become a performer/actor, but online media is a new stage of sorts to perform on! I tell the museum’s stories there and I am super excited about it.

Last night I got to dress up and tell the museum’s stories at a 1960 Beatles event at Market Gallery and it was oh so fun! I used Joan Halloway from Mad Men as inspiration, see the results! 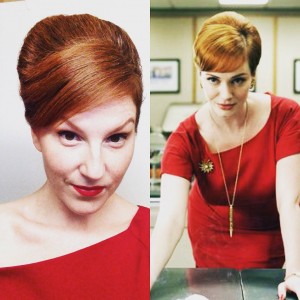 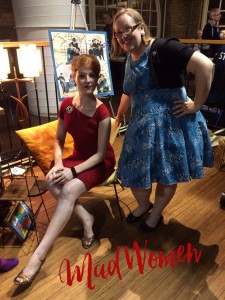 It was so fun to be in period dress (and not be in a bonnet!) and get so many people’s reactions – so many participants shared their stories of fashion and memories of their friends and family looking like me! (And a lot of people thought I looked like Joan so that’s good! Mission accomplished!)

I love playing dress up, that will never change. I love telling stories either on stage or off 🙂

In the past week I have travelled through over a hundred years of time: 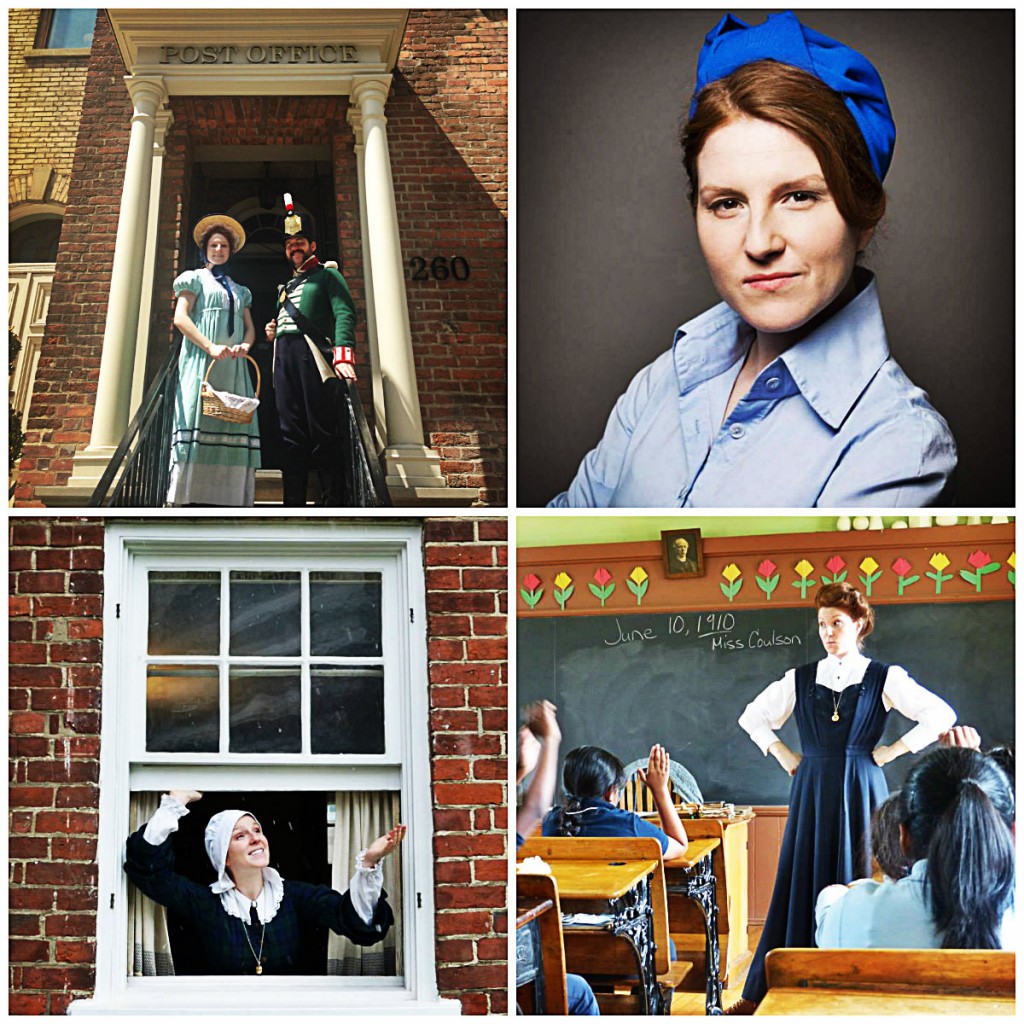 My work at the museums mean I dance between 1851 farm house living in a tartan parlour dress and bonnet, to the Edwardian teacher jumper that makes me feel like Anne of Green Gables all grown up!

New to the mix was stepping in to talk about the end of War of 1812 and then walking Old Toronto and making a pit stop at Toronto’s First Post Office.

Lastly, fast forward me to 1945 to the WWII epic “State of Women” with me making airplanes for the war.

Each gig I dive into history and I never stop learning. People share their stories with me and I pocket the information to tell someone else. I love the sharing that happens when you start talking about the past; everyone has one and everyone has a story to tell. I’m one of the lucky ones that gets to do that all the time 🙂

So that’s 130 years in one week. I wish I got airmiles for that.

I am one of the playwrights for the Humber River Shakespeare Co. Sonnet Show this coming May 24th. I get 14 days to write 14 minutes based on 14 lines of Shakespeare (aka a sonnet)

So are you to my thoughts as food to life,
Or as sweet-season’d showers are to the ground;
And for the peace of you I hold such strife
As ‘twixt a miser and his wealth is found.
Now proud as an enjoyer, and anon
Doubting the filching age will steal his treasure;
Now counting best to be with you alone,
Then better’d that the world may see my pleasure:
Sometime all full with feasting on your sight,
And by and by clean starved for a look;
Possessing or pursuing no delight
Save what is had, or must from you be took.
Thus do I pine and surfeit day by day,
Or gluttoning on all, or all away.

And I have 3 Women actors and 2 Male actors… guess which room I got at the museum? The kitchen!!! 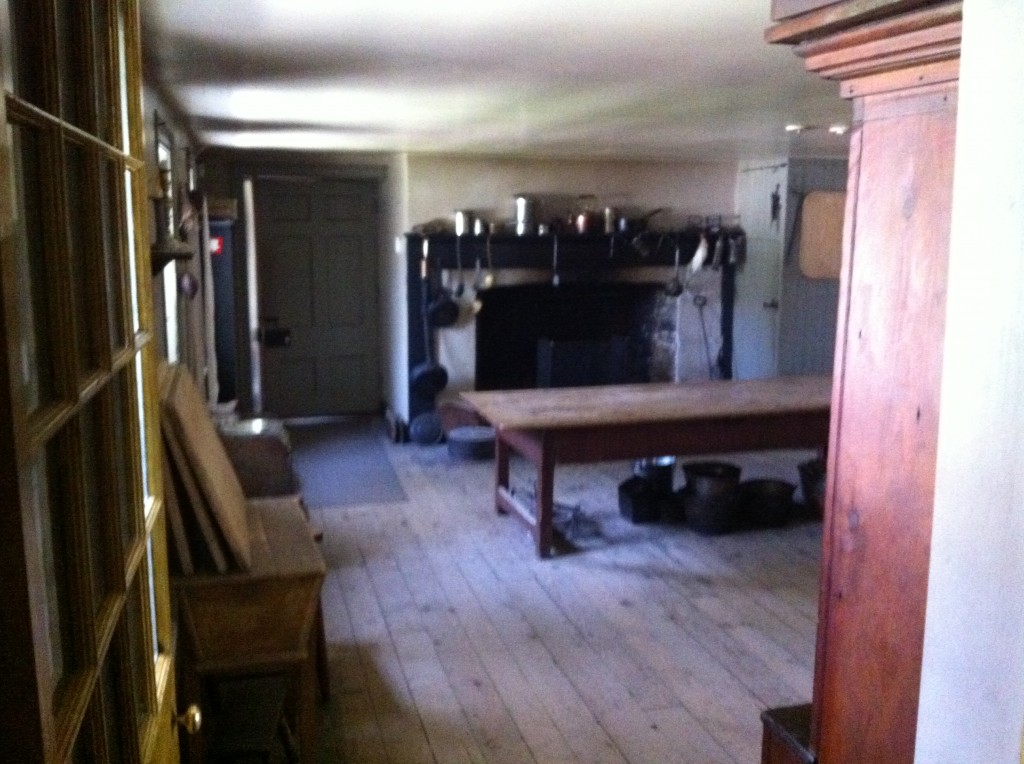 View from the Tavern into the Kitchen

The view from the “back door” 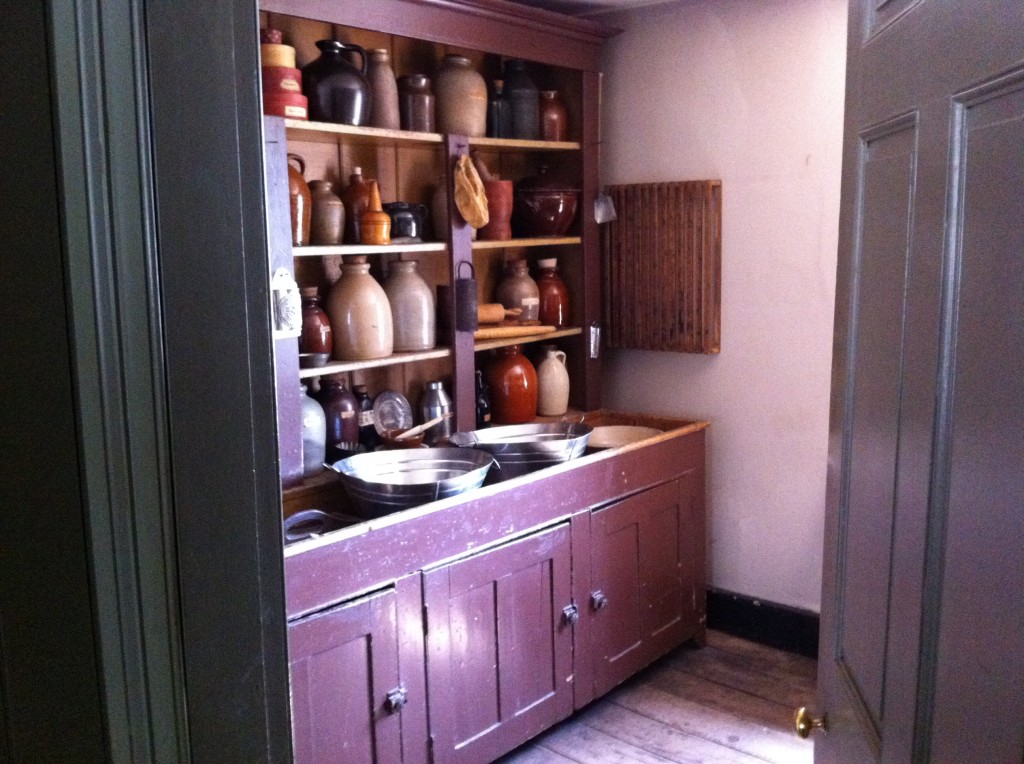 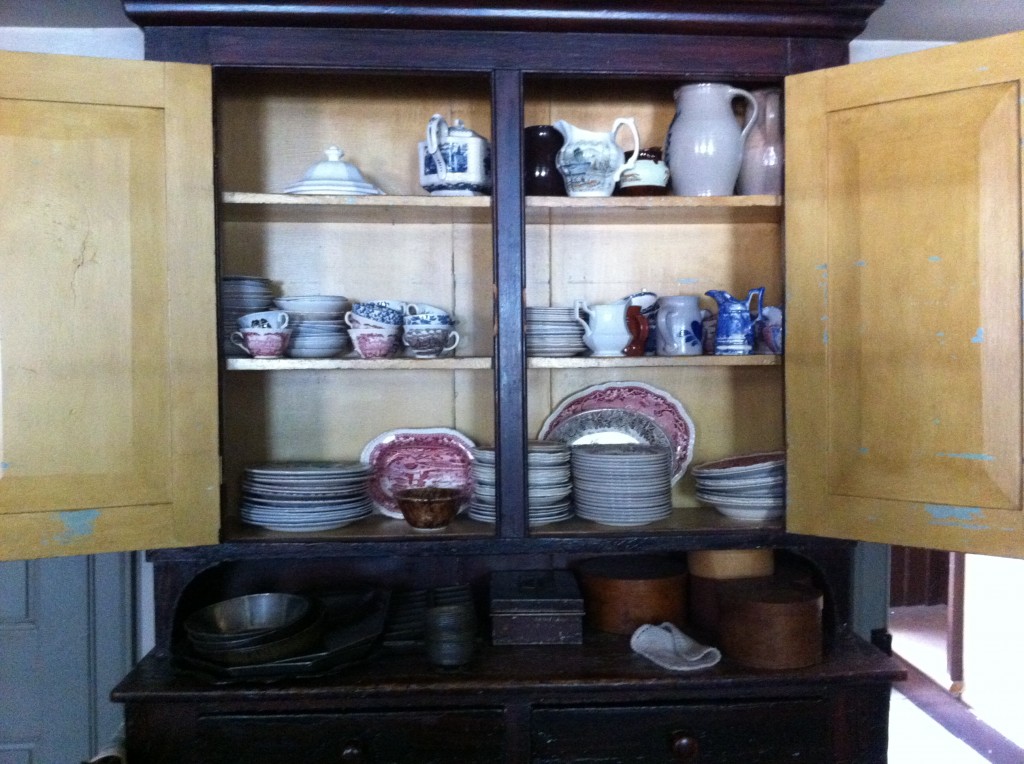 The repro dishes I can use! 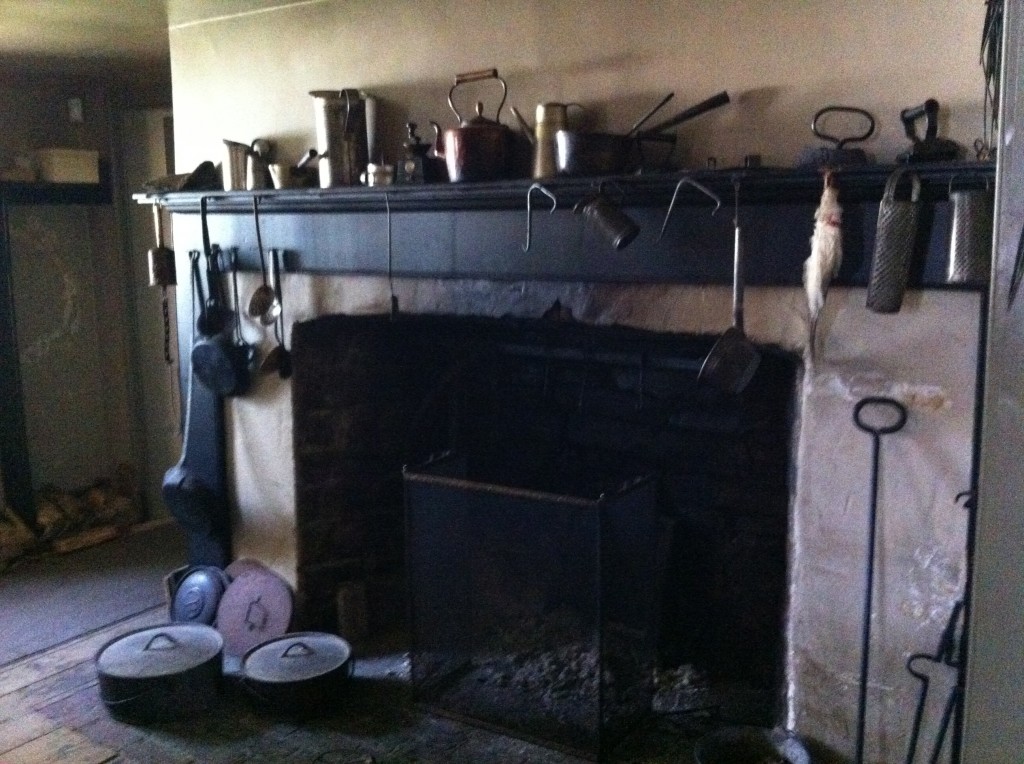 I also work here from time to time as I am a historical interpreter. This is an Irish household that had a tavern and inn along with some farming in the mid 1800’s. It has been restored to the year 1847 (right when the Irish Potato Famine is in full swing!)

I want to write something about food and love. I want the audience to experience food. I want the actors to be servers and cook food… Will I get my wish?! Here’s hoping – and off to the proverbial drawing board (aka my lap top)!

Learning Through The Arts – it’s something I have always facilitated, but maybe I just didn’t call it that. I have been teaching drama (well Shakespeare first and foremost) to kids since I was a counselor at 14 years old. Now at 30 years old, I am a program developer and facilitator with the City of Toronto, a teacher with Artsarama, and a hired character artist for several museums who need someone kids can interact with and learn from talking about the past.

So when this course caught my eye: http://learning.rcmusic.ca/teacher-and-artist-training/artist-educator-professional-training I had to know more. And once I did – I had to take it. Sure I already do most of the Foundations and Level 1 already in my job – but the higher levels are what are intriguing to me. Plus the connections made through the class is another great way to learn about LTTA. 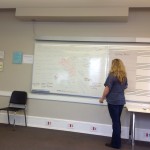 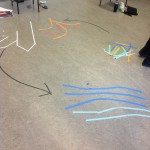 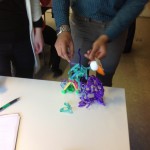 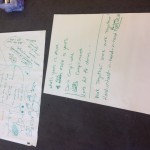 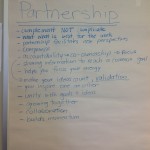 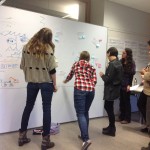 I took the class not only to better my understanding of what I do and expand my knowledge base – but the main focus I wanted out of this is to learn how to integrate my suicide bereavement script into an education program that I can tour to Grade 12’s and First Year Frosh in Canada. Targeting the age group that my brother was when he felt the pull of suicide.

I enjoyed my time with the Foundations level, but, as many thought it would be, I felt ahead of the game in this course. I’m excited to keep climbing in the levels to a place where I feel challenged. I really enjoyed the people in the class (it was nice to have a small class of 7 so we could really have quality time with our instructors) and I liked the facilitators too. Nancy Dutra and Ciara Adams from Theatre Gargantua were great hosts to this level.

So as I take time between courses and apply some honed skills to my work immediately, I am beginning to think of how my shoe “Everything but the Cat…” can be an educational touring show for teens…